Can an Offer Be Revoked? 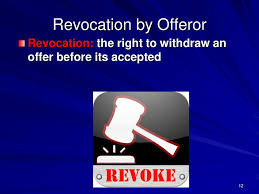 Can an Offer be Revoked?

This seems to be a question that arises rather frequently. Let’s have a look at some of the issues.

A Broker from a Cooperating Brokerage (A) submitted an offer to the Listing Brokerage with an Irrevocable Date and Time: December 17th, at 8:00 pm.

Another Broker from Cooperating Brokerage (B) submitted an offer on the same property Irrevocable Date and Time: December 18th at 4:00 pm.

The Listing Brokerage contacted Cooperating Brokerage (A) to let the agent know that there was a second offer and asked if their clients would like to submit an improved offer.

This sounds like the Broker for Brokerage (A) is spending too much time on the internet.

It is trite law that an Offer can be withdrawn by the Offeror at any time prior to acceptance. This information is easily retrievable from many sources.

But, you have to read on, and not just conclude that you have the right answer.

If an Offer is made “irrevocable”, utilizing the standard forms in real estate transactions, then it cannot be revoked. Have a look at the standard OREA Agreement of Purchase and Sale Form. It is made to be irrevocable.

The Offer is presented with consideration noted (thereby making it an invitation to enter into a contract) and with a seal (creating a legally binding agreement not to revoke before expiration of the time limited for acceptance) in the absence of consideration.

So, general contract law is not the issue.

What is in issue is the OREA Standard Agreement of Purchase and Sale Form. And that says, you are stuck with your Offer until it is accepted, rejected or expires.

The matter of offer and acceptance arise in thousands of contracts every day, and the law is largely unchanged for hundreds of years.

In terms of actual litigation on this point, the last time it was reviewed and considered by the Supreme Court of Canada was 1981.

That case involved a construction bid and tender process, so the entire matter of offer and acceptance was somewhat more sophisticated.

In that case, the Supreme Court of Canada broke down the tendering and bidding process into two separate contracts:

2)     Contract B, being the ultimate construction contract.

In Ron Engineering v. Queen, a contract bidder discovered a mistake made in the bidding process and sought to withdraw its bid before it was accepted. It was clear on the facts that a true error had been made in the mathematical computation of the bid and the bidder Ron Engineering in good faith wished to withdraw.

The Supreme Court of Canada in its analysis concluded:

·        the tendering process involves two contracts, not one

·        the second is the actual contract being sought

·        consideration for the owner is the promise that, if selected, the bidder will enter that contract on the terms provided in the documents

·        If the terms so stipulate, then the bidder’s acceptance of the owner’s offer is irrevocable

The Supreme Court of Canada decided that the bid was irrevocable and the bidder forfeited its deposit.

This case is a little different since the parties were effectively reversed and the construction tendering process is somewhat more sophisticated than a buyer submitting an Offer to purchase a property from a seller. In that case, there were two contracts, not just one.

Nevertheless, the “irrevocable” provision” was enforced.

The other reference in that case revolved around the issue of mistake. A unilateral mistake will entitle the Offeror to withdraw his Offer, provided that the Offer contains an error on its face. An example might be a property listed for $250,000, and by error the buyer submits an Offer for $2,500,000, adding and extra zero by accident.

That type of an error is clear on the face of the document. However, without that type of error, the Offer stands, and cannot be withdrawn if it has been made irrevocable.

Offers which are submitted that contain consideration, or a seal (or both), and include an “irrevocable provision” are in fact open for acceptance until the time period expires, provided, of course, that there is no error on the face of the contract.

That was the argument which would support the irrevocability in the multiple offer context in many situations.

But, what about single offers?

Let’s go back to the OREA standard Form. There’s a seal on the document. That means that consideration is not necessary for the Offer to be binding upon the Offeror. The seal alone commits the Offeror to the deal, and the deal is that this Offer can be accepted up until the time it expires.

Until what time may an Offer be revoked?

All in all, that’s reasonably straightforward.