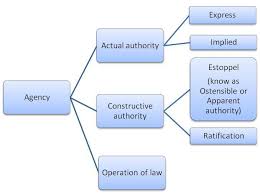 Estoppel: For years, Bob has had his secretary order and pick up a pizza. Bob pays when he’s in the store, the following week. Bob can’t simply tell the restaurant that he’s not paying for last week’s pizza. That’s estoppel. Bob could tell them that he won’t be paying any more. That’s a simple termination.

Ratification: Bob goes out as an agent, buys 5 houses in a row in his own name in June. Bill the builder takes over the project, some 3 months later in September. He ratifies Bob’s June purchase (3 months earlier), but, of course, Bill had never even heard of Bob then. He takes over the deal effective 3 months ago “as if” he were the Principal at that time, that is, “in June”. This is not an Assignment which would be effective 3 months later in September. This is Bill “ratifying” (after the fact), that Bob was indeed his agent some 3 months ago.